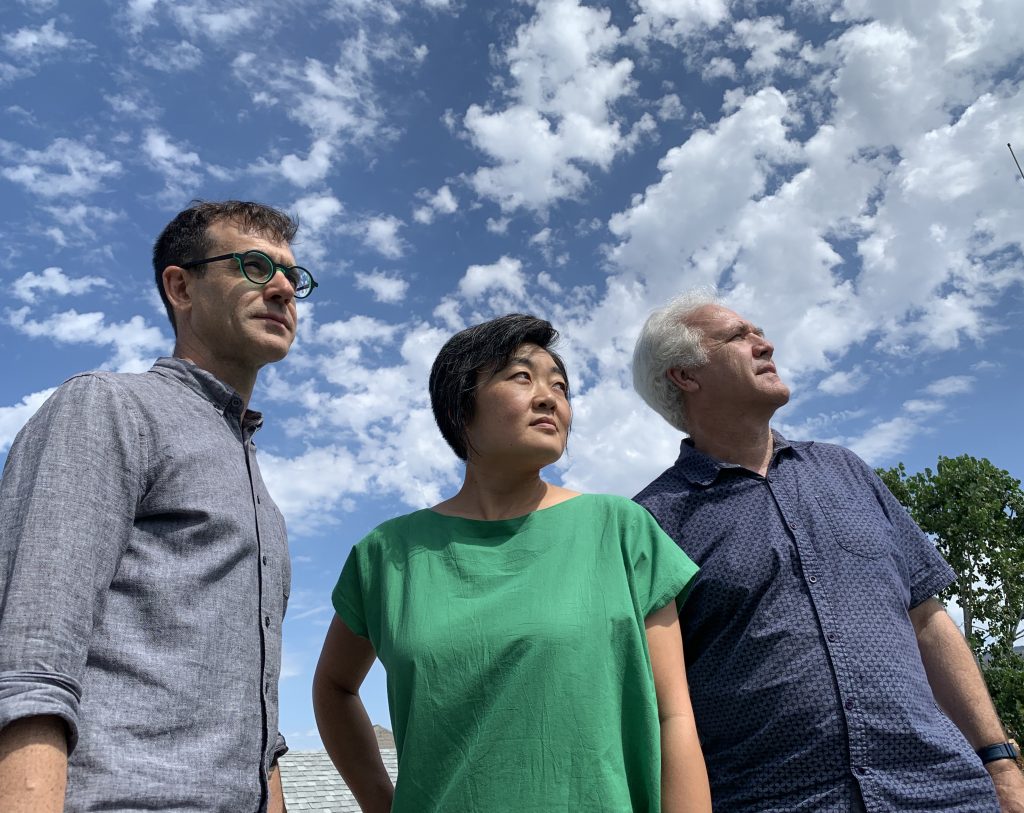 The Chromelodia Project is a trio of composer/performers based in Oakland, California performing microtonalcompositions by Chris Brown in 43-tone just-intonation, also integrating improvisation and interactive computer music. Founded in 2016, its members are Chris Brown, piano and computer, Theresa Wong, voice and cello, and Kyle Bruckmann, oboe and electronics. The trio proposes a concert of music from the enclosed Some Center CD release on New World records, along with its newest piece, Occhio (2020), based on poetry by Italian poet Erika Dagnino. Workshops on just-intonation, improvisation, and interactive electronic music can be integrated with a concert within academic settings.

The Chromelodia Project’s repertoire is based on the tuning system invented by American iconoclast composer and instrument-builder Harry Partch. This foundation expands pitch sensibility beyond the equal tempered scale, offering three to five tuning alternatives for each of the familiar 12 notes of standard equal temperament. To provide pitch-references for his tuning system Partch retuned a reed organ that he named “Chromelodeon”, which inspired the ensemble’s name.

An ensemble that explored a new genre called “Computer Network Music”, the six composer/performers of The Hub electronically coordinated the activity of their individual systems through a central microcomputer, “the hub” itself, as well as manually through ears,eyes, and hands. The Hub sought surprise through the lively and unpredictable responses of their systems, and instead of trying to eliminate the imperfect human performer, used the electronic tools available to enhance the social aspect of music making. The Hub is John Bischoff, Tim Perkis, Chris Brown, Scot Gresham-Lancaster, Mark Trayle, and Phil Stone.

The main interest of this trio is the process of instant composing. As all musicians have the background in composition and improvisation they are able to compose pieces with a clear inner structure collectively on the fly. The listening audience can therefore attend to the process of the creation of the music. Besides clarinets, saxophone, piano and vibraphone, the trio features live processed interactive electronics and „classical“ percussion instruments like gongs, tam tams, bells and tympani. Sometimes the instruments are used with extended techniques to blend into a sound-world which makes it hard to tell who is playing what. In their first European tour they performed at the „Donaueschinger Musiktage“ in Germany, which is the oldest and one of the most important festivals in the world for contemporary music.   Their live performance at Donaueschingen is included in their double-CD  “Vermilion Traces” on Leo Records, which also includes studio recordings prior to the festival made in the SWR Radio studio. Video excerpt of live performance at Roulette, NYC, 2014.

Transmissions  is a project-collaboration between composer/performers Chris Brown and Guillermo Galindo.  Transmissions is an audience interactive, live electronic music performance series concerning the transmission of culture through the information media of sound and radio. It redefines the relationship of performers and audience in diverse communities to the radio medium by emphasizing their ability to create both the content and the means of production of radio communication. Its consistent theme is the persistence of culture through sounds and symbols, even as cultural contexts are changed, and as languages and artistic expressions are hybridized.

In a Transmissions performance, the center of an outdoor space is occupied by performers who play live electronic music from laptop computers. Their music often accompanies voices reading texts, and all are mixed into four channels, each of which is sent to its own low-power, FM radio transmitter. The transmitters are tuned to different frequencies not already used by broadcasters in the performance locale. The audience is encouraged to bring their own portable radio receivers, especially battery powered boomboxes, and to tune in one of the transmission channels and play its sound while moving around the space. Since the four channels of sound are distributed evenly amid the audience, their movement and physical relationship to each other becomes a choreography of sound in space. They are in this way made into creative partners in the performance of the music, and the event becomes an interaction between the musicians, the audience, and the sounds and themes presented in the transmissions.

An electronic improvisation ensemble. Members are Chris Brown, Scot Gresham-Lancaster, and Tim Perkis. All three of them were members of The Hub, the legendary computer network band. They’ve also done other impressive things; look at their websites for details. fuzzybunny is their latest project, which consists of high-energy, dense live improvisation and composition, using an assortment of homebuilt electronic and software-based instruments

This ensemble was formed in 1984 to explore compositions that include improvisation and live/interactive electronics. It included Chris Brown, piano/electronics and composition, saxophonist/composer Larry Ochs (also a member of the Rova Saxophone Quartet), percussionist William Winant (of the Abel-Steinberg-Winant trio), and Scot Gresham-Lancaster, electronics.