What-Are Those Strange-Sounds in the Air at the New Berkeley BART Plaza
by Sam Lefebvre, KQED Arts, Oct. 17, 2018 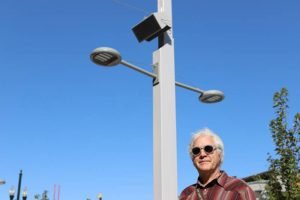 BY JOHN MARCHER, “A BEAST IN A JUNGLE”
DECEMBER 20, 2014It’s probably been a few years in the making, perhaps more than a decade, but one of things I’ll remember most about 2014 is it was the year I became a convert to “new music.” It’s a term I’m not fond of because of its essential meaninglessness, but it works as a kind of catch-all description for music that’s often difficult to describe. I realized this last night as I was sitting in the Center For New Music watching and listening to the Gratkowski/Brown/Winant Trio create forty-five minutes of fascinating music and noise of remarkable cohesion and virtuosity, followed by a ten or fifteen minute encore, all of it improvised. It was the most recent in a string of highly rewarding concerts I’ve attended over the past couple of months featuring music recently written by living composers and performed by musicians working outside the popular mainstream that left me with a feeling there’s a lot of vital music being created right here and right now.
Chris Brown and William Winant have played together for about thirty years and it shows. As musicians they have an intuitive sense of where the other is going and while their individual performances might and sound deceptively like disparate elements, they  have an uncanny ability to converse with and compliment each other. Frank Gratkowski, who lives in Berlin, has a long association with them but his contribution to the trio’s overall sound resided on top of the frame created by Brown and Winant rather than within it, though he weaved so organically into the whole it hardly mattered. Brown played the piano (and often played inside the instrument with an assortment of objects including a ping-pong ball in a bowl) miked into his own software (along with another microphone picking up Gratkowski’s winds and two more capturing Winant’s percussion set-up) then sampled it all via an iPad resting above the keyboard and reproduced through two speakers as a fourth voice in the room. The electronic elements never distracted from the live instrumentation, but certainly made itself present in haunting ways, often strange, causing me to look around to see who was playing what and finding no answer. From across the room one might not have noticed the extreme level of Brown’s concentration in creating all of this, but sitting close to him I noticed he broke a sweat.

Gratkowski played a saxophone, clarinet and bass clarinet. His mute was a drinking glass with a little water in the bottom, which created an amusing visual as he played sans shoes in brightly colored socks. Often he would use the instrument’s keys as percussion, even the mouthpieces, which looked highly customized, and often he went for the highest reaches of the instrument’s scale. He favored short staccato bursts and percussive strikes over extended lines, which grew to culminate in their own distinct waves of sound.Winant, who has performed with a long list of illustrious musicians and composers and particpated on over 200 recordings, is an amazing person to watch and hear– in fact it’s hard to take one’s eyes off him because he was constantly in motion doing unexpected and unusual things. He performed on a kettle drum, a tom, triangles, the wall, the floor, a balloon, in his mouth, through a strange tube, and more using drumsticks, mallets, a Super Ball, various bows, his fingertips, palms and face. It was often bizarre, sometimes baffling, and frequently entertaining, but most importantly everything he did managed to work, creating fascinating, distinct sounds that always melded into the whole no matter how far out they seemed to go in the moment– and at times they went really far out. And this was the key factor in making this concert such a mesmerizing performance– although all three musicians were continuously improvising, the overall sound they created in each moment always remained on a solid track and when they finished it felt and sounded like they had indeed reached the end, though no one was really sure until Winant turned to the audience and said “Thank you.” It was an hour of compelling brilliance.

Among several other reasons, this bicontinental trio stands out for its fluency in free improvisation and contemporary classical and experimental practices—and how those lines dissolve during a performance. While German reedist Frank Gratkowski is probably best known as a ferocious exponent of European free jazz, his Bay Area partners work most often in new-music circles. But on the trio’s 2012 double CD Vermillion Traces/Donaueschingen 2009 (Leo), those affiliations don’t matter much. The group generates a shape-shifting swirl of texture and color that transforms from one moment to the next with a quicksilver fluidity. And the live-signal processing by Chris Brown, a Chicago-area native who’s long been a devotee of interactive computer music, pushes the trio into a different realm. Mutating the sounds created by his partners—the serrated blurts and upper-register squalls of Gratkowski and the jagged vibraphone and metallic clatter of William Winant—Brown adds an extra level of visceral abstraction that feeds back into the live flow. Sometimes Brown knots or regurgitates the output of his cohorts in tangles or stutters, forcing a kind of spontaneous redirection. But each musician reacts beautifully on the fly, moving the music forward and surprising the listener as much as the players. —Peter Margasak, chicagoreader.com, 12.10.2014