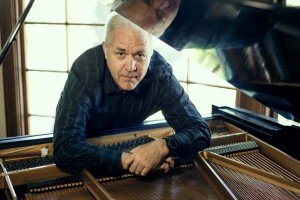 “My interest in new musical resources has changed from being based on timbre, rhythm and interactive electronics to pitch relations. I came to that with the skills I acquired tuning pianos in equal temperament for many years, and wanting to push past that.”

As a composer, pianist and computer programmer, Chris Brown integrates a mixture of modern musical resources, such as interactive electronics, real-time digital-signal processing, musical-instrument design and improvisation in his works. In addition to being a member of the pioneering interactive-computer-network ensemble, The Hub, Brown is a professor of music at Mills College and co-director of its Center for Contemporary Music for over two decades.

Consequently, when he began composing his concert-length, solo piano work, Six Primes, he originally imagined it with an electronic element. “I have an interactive sequencer that I designed, and I was trying to teach myself to play the polyrhythms using it. But in the end, I decided it would be more interesting for me as an acoustic piece than as an electro-acoustic one.”

Brown says the decision to focus on acoustic piano came out of a desire to return to his piano-tuning practice. “By the time I got to Mills, I had been supporting myself as a piano tuner in San Francisco for about 10 or 15 years,” he explains. “Of course, I was aware of just intonation when I was there and Lou [Harrison] was around, but it felt too narrow for me at that point. I was more interested in timbre, noise, and electronics, and it seemed like just intonation was a step backwards because there was a fascination with intervals being pure, and that was not what I was interested in—and I still am not. For me, it’s about hearing interval relationships and how we can extend our ability to perceive new kinds of relationships in the higher-prime area of the harmonic series.”

Nearly every aspect of Six Primes is derived from the whole-number ratios in a scale given to Brown by composer Ellen Fullman. Based on prime numbers up to 13 (or 13-limit), the scale is restricted to 12 notes per octave, repeated across the entire piano keyboard.

“A lot of theorists say 13-limit is as far as we can hear, but I wondered what would happen if I set just a few of those relationships on a piano. I spent the first year getting used to the tuning and trying different subsets of it.”

Although the scale is made up primarily of consonant, low-number ratios, such as the harmonically perfect fourth and fifth, Brown devised a way to introduce intervals that gradually increased in complexity.

“A big step in the composing process was the realization that I needed to know what every possible interval was, not just what the primary ratios.” The result is a matrix that shows every pitch relationship that can be derived from the original scale.

“This gave me alternatives for every scale degree that we are used to, in terms of 12-tones-per-octave equal temperament. For example, I have different versions of the major and minor third and the major and minor sixth. However, I didn’t want to write a piece that sounded like it had just one tonal center, so I tried to give all of the interval relationships equal time using processes that are more common in atonal music (such as set theory), but imposing them onto a tuning that’s based on a single fundamental and the hierarchies that derive from it.”

With so much material to consider, Brown decided to restrict his compositional choices by creating six subsets of the 13-limit’s prime number series—2, 3, 5, 7, 11, and 13. The title of each movement indicates which numbers were used.

He also used this system to determine the number of measures he had to work with. “If it was 13 and 7, the section would be 20 measures long. If it was 13, 7, and 6, it would be 26 bars. Once I had it all laid out, I could compose intuitively inside those boundaries.”

Considering his professional background, I wondered if Brown was able to tune the intervals for this piece solely by ear. “On the piano, I can use harmonics from the low strings to tune it, and I’ll reference an electronic tuner when I need to. But it’s still pretty hard for me to tune a 13-limit interval. It depends on where in the pitch scale it is. It’s a fairly high harmonic relation, and it’s difficult to do by ear, but it can be done once you get used to it.”

One of the hurdles in performing Six Primes is finding producers who will allow the intonation of their piano to be altered. A major concern is whether a tuning such as this will have a negative impact on the instrument.

“It doesn’t change the tension, overall,” he explains. “I think that’s the critical thing from the point of view of the tuner. Only a couple of the pitches are off by 50 cents from their equal-temperament counterpart—the 11/6 and 11/8 are nearly quarter-tone relationships. But the 9/8, 4/3, and 3/2 are very close to equal temperament. Of course, all of the pitches are off to a certain extent, and when you change things that much it does require a couple of tunings. But it’s not so radical that it’ll be hard for the piano to recover from it. It certainly won’t damage the instrument.”

In his most recent work, First Light (based on a poem by Jackson MacLow), Brown continues his tuning explorations in a chamber ensemble setting. Inspired by Harry Partch’s “Seventeen Lyrics of Li Po,” Brown scored the piece for oboist Kyle Bruckmann, cellist/singer Theresa Wong, and himself, utilizing Partch’s unique 43-tone scale. His 88-key controller serves the same purpose as Partch’s Chromelodeon by providing reference pitches for the performers to use as they tune each note by ear.

“In many instances, I play a pitch and they supply the intervals in relationship. If we hit a chord that’s not quite right, there is a moment of adjustment as the players find the sound. You often get these gorgeous beat frequencies, which I think of as an integral part of the music. You can’t expect musicians to hit all of these intervals immediately, and it’s beautiful to hear them come into focus. So why shouldn’t that be part of the music?”

But doesn’t that defeat the purpose of using such precise intervals? “Perfection is never possible,” he explains. “As a piano tuner, you realize that you could work forever on a tuning, whether it’s in equal temperament or just intonation, and it’ll never be perfect, because perfection is not part of the physical plane. In fact, it’s more beautiful to hear a little bit of this out-of-tuneness. You quickly realize that when something is slightly out of tune, it shows you what it really means to be in tune.”