The main focus of the Gratkowski-Brown-Winant trio is the process of instant composing. All three musicians have extensive backgrounds in both composed and improvised music, which allows them to compose pieces with a clear inner structure collectively on the fly. Besides clarinets, saxophone, piano and vibraphone, the trio also features live interactive electronic processing and percussion instruments like gongs, tam tams, bells and tympani. Sometimes the instruments are used with extended techniques to blend into a sound-world which makes it hard to tell who is playing what. 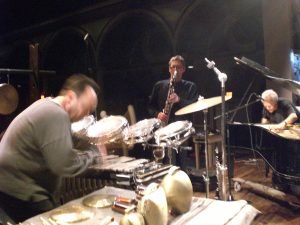 About the trio’s debut CD Wake (Red Toucan, 2008) Nic Jones of AllAboutJazz wrote “At all times this is music that holds the attention, even while it makes demands of the listener… the music is in thrall to the moment, even while it’s outside the measure of time.” The trio was featured on the 2009 Donaueschinger Musiktage in Germany, one of the oldest and  important festivals in the world for contemporary music.  Their double-CD Vermilion Traces (Leo Records, 2012) documents this performance along with recordings at the famed SWR radio studio in Baden-Baden made in advance of the festival . 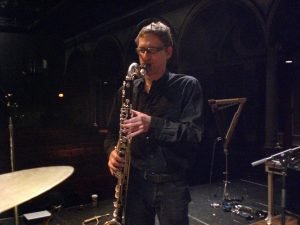 Frank Gratkowski was born in Hamburg in1963, started playing the saxophone at age 16 and studied at the Hamburg and Cologne Conservatories of Music. His saxophone teachers included Charlie Mariano, Sal Nistico and Steve Lacy.   His first solo CD Artikulationen was the 1991 prizewinner in the Musik Kreative contest. Since 1992 he has been working in a duo with the pianist Georg Graewe, often extended through the participation of additional musicians such as drummer Paul Lovens and bassist John Lindberg. In 1995 he founded the Frank Gratkowski Trio with Dieter Manderscheid (Germany), bass, and Gerry Hemingway (USA), drums. In 2000 the trio was joined by Dutch trombonist Wolter Wierbos. Since 2003 the quartet began appearing as a Double Quartet with the addition Tobi Delius, Herb Robertson, Wilbert DeJoode and Michael Vatcher. In 2005 Gratkowski was awarded the SWR Jazzprize. He has played on numerous international Jazz and New Music Festivals including Vancouver, Toronto, Chicago, New York, Seattle, Quebec, Barcelona, Madrid, Lithuania, Warsaw, Zagreb, Prague, Bratislava, Sofia, Bucharest, Odessa, Belgrad, Huddersfield, London and Roma.  He has taught saxophone and ensemble workshops at the Cologne, Berlin and Arnhem Conservatories of Music. He has released more than 20 CDs under his own name. http://www.gratkowski.com 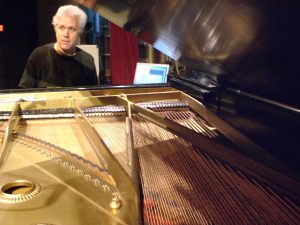 Chris Brown, composer, pianist, and electronic musician, creates music for acoustic instruments with interactive electronics, for computer networks, and for improvising ensembles. Collaboration and improvisation are consistent themes in his work, along with the invention and performance of new electronic instruments and software. These range from electro-acoustic instruments (“Gazamba”, 1982), to acoustic instrument transformation systems (“Lava”, 1992), and audience interactive FM radio installations (“Transmissions”, 2004). He is a founding member of The HUB, the pioneering network music ensemble, and has composed many interactive works for the percussionist William Winant (Iconicities, New World Records.) His most recent music explores microtonal tunings, including 6Primes, for piano in 13-limit just intonation, Arcade for string quartet, and Ragamala Chiaroscuro, for wind trio. As a performer he has recorded music by Henry Cowell, Luc Ferrari, José Maceda, John Zorn, David Rosenboom, Larry Ochs, Glenn Spearman, and Wadada Leo Smith; as an improvisor he has recorded with Pauline Oliveros, Fred Frith, Rova Saxophone Quartet, Ikue Mori, Biggi Vinkeloe, Don Robinson, and Van-Anh Vo, among many others. Recordings are available on New World, Tzadik, Pogus, Intakt, Rastascan, Ecstatic Peace, Red Toucan, SIRR, Leo, and Artifact labels. He is a Professor of Music at Mills College and Co-Director of the Center for Contemporary Music (CCM).  https://cbmuse.com 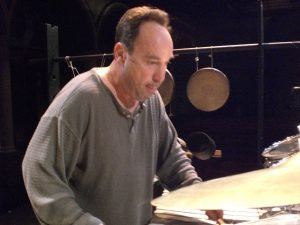 William Winant has performed with some of the most innovative and creative musicians of our time, including John Cage, Iannis Xenakis, Keith Jarrett, Anthony Braxton, James Tenney, Cecil Taylor, George Lewis, Steve Reich and Musicians, Jean-Philippe Collard, Frederic Rzewski, Ursula Oppens, Joan LaBarbara, Oingo Boingo, and the Kronos String Quartet.  He is principal percussionist with the San Francisco Contemporary Music Players and the John Zorn Chamber Ensemble. Since 1995 he has been the percussionist with the avant-rock band Mr. Bungle, has made two recordings (“Disco Volante” and “California” on Warner Brothers), and has toured throughout the world with the group. In March of 1997 he participated in the world premiere of Lou Harrison’s quintet “Rhymes with Silver” featuring cellist Yo-Yo Ma and the Mark Morris Dance Group, and has toured the piece throughout the United States and Great Britain. He has made over 130 recordings, covering a wide variety of genres, including music by Earle Brown, John Zorn, Pauline Oliveros, Luc Ferrari, Karlheinz Stockhausen, Danny Elfman (“Batman Returns”), Souxie and the Banshees, The Ex, Han Bennink, White Out with Jim O’Rourke, Thurston Moore, and Mike Patton. His recording of Lou Harrison’s “La Koro Sutro” (which he produced for New Albion Records) was the New York Times Critic’s Choice for best contemporary recording of 1988. In 1999 he produced a recording of 20th-century avant-garde composers with the influential rock band Sonic Youth; “Goodbye 20th-Century” (SYR4) was hailed by both The Los Angeles Times and New York’s Village Voice as one of the best compendiums of this type of music ever recorded.  Many composers have written works for him, including John Cage, Lou Harrison, John Zorn, Peter Garland, Alvin Curran, Chris Brown, David Rosenboom, Larry Polansky, Gordon Mumma, Alvin Lucier, Terry Riley, Fred Frith, Somei Satoh, and Wadada Leo Smith. Mr. Winant has been featured as a guest artist with the Los Angeles Philharmonic (under the direction of Pierre Boulez), the San Francisco Symphony, and the Berkeley Symphony, as well as at Cabrillo Festival, Ravinia Festival, Salzburg Festival, Holland Festival, Ojai Festival, All Tomorrow’s Parties, Taklos, Other Minds, Lincoln Center, Royal Festival Hall, Library of Congress, The Barbican, and Brooklyn Academy of Music. He teaches at the University of California at Santa Cruz and Berkeley, and  at Mills College in Oakland. For eight years Mr. Winant was Artist-in-Residence at Mills College with the critically acclaimed Abel-Steinberg-Winant Trio. Formed in 1984, the ASW Trio premiered over 25 new works for violin, piano, and percussion at major festivals and recitals throughout the world. Their recordings can be heard on the New Albion, Tzadik, and CRI/New World labels.